These beliefs are held equally by both Republicans & Democrats. 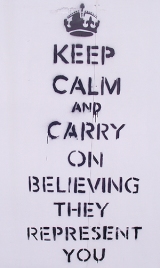 Large majorities of Americans believe that members of Congress will favor the interests of those who donate to Super PACs over those who do not — and that Super PAC donors can pressure elected officials to alter their votes.

An alarming number of Americans report that their concerns about the influence of donors to outside political groups make them less likely to engage in democracy.  Communities of color, those with lower incomes, and individuals with less formal education are more likely to disengage due to concerns about how much influence is wielded by Super PAC donors.

The Super-PAC Steamroller: Coming to a Town Near You!

If you like what dark-money groups are doing to national politics, you’ll love what they can do in a local race.

Super-PACs playing at the state level don’t need to drop millions to make a big impact, says Neil Reiff. In a crowded state-level or congressional primary with three or four candidates, a little money goes a long way. “If you’ve got a field with little or no name recognition,” Reiff says, “you can drown out everyone else.” …

“If super-PACs are going to play at the state level, we’re not going to find out until later, and it will probably happen in a very different way than in congressional or presidential races.”

New polling reveals an increasing number of voters concerned about the role of money in politics.

The poll found the majority of Republicans, Democrats and independents in agreement with the following statement:

“Given what I see in the presidential race,

I am fed up with big donors and secret money that controls which candidate we hear about.

News organizations cultivate a reputation for demanding transparency, whether by suing for access to government documents, dispatching camera crews to the doorsteps of recalcitrant politicians, or editorializing in favor of open government.

But now many of the country’s biggest media companies, which own dozens of newspapers and TV news operations, are flexing their muscle in Washington in a fight against a government initiative to increase transparency of political spending.

The corporate owners or sister companies of some of the biggest names in journalism 2014 NBC News, ABC News, Fox News, The Washington Post, The Wall Street Journal, USA Today, Politico, The Atlanta Journal-Constitution and dozens of local TV news outlets 2014 are lobbying against a Federal Communications Commission measure that would require broadcasters to post political ad data on the Internet.

As we have recently detailed, political ad data is public by law but not easy to get because it is kept only in paper files at each station. The FCC has proposed fixing that by requiring broadcasters to post online the details of political ad purchases, including the identity of the buyer and the price. END_OF_DOCUMENT_TOKEN_TO_BE_REPLACED

A collaborative of Boston College graduate students will be hosting a panel on the subject of Citizens United and campaign finance reform in Jamaica Plain on April 11 at 7pm.

Admission to the forum is free and residents of Boston and the surrounding communities are encouraged to attend and learn the reasoning behind this important Supreme Court decision and the rationale of the opposition.

“People should care about the Citizens United decision because it is having an effect on the way democracy is practiced in this country, about the way elections work and who gets elected and why,”

said Professor Lawrence Friedman, a professor of Constitutional Law at New England Law | Boston and a panelist for the forum. END_OF_DOCUMENT_TOKEN_TO_BE_REPLACED