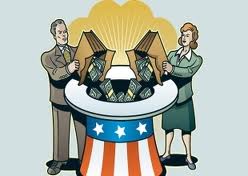 “Money in politics is not a distraction from the economy, it is the economy.”

Working to restore our democracy, by getting money out of politics, starting with overturning Citizens United v. FEC.
View all posts by citizenspetition →

One thought on “POLL: Voters Care About Money in Politics”